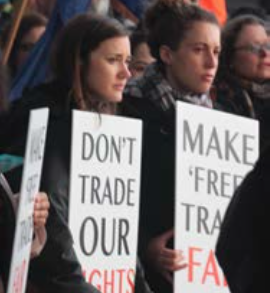 The Trans-Pacific Partnership (now the TPP-11) was  originally  a massive free trade agreement involving Australia, the US and ten other countries, which reduces our democratic rights while increasing the rights of global corporations. The US withdrew in 2017, and it became the TPP-11, with some changes, but most of its worst features remain. The TPP-11  could be bad for:

Economists predicted The original TPP-12 would not deliver promised jobs and growth. ​

After six years of community campaigning, the withdrawal of the US in January 2017 meant the TPP-12 could not be implemented.

A Senate inquiry report  said no to the  implementing legislation in February 2017.

Japan and Australia led the pushed for a  revived TPP-11 without the US. In November 2017 TPP -11 negotiators signed and re-badged the deal as the Comprehensive and Progressive TPP (CPTPP) and suspended some of its controversial clauses, (but not ISDS). The text was tabled in Parliament on March 26, 2018, and reviewed by parliamentary committees, with most submissions opposing the deal. Many aspects of the TPP-11's thirty chapters contradict Labor Policy, but despite strong internal opposition the majority of the parliamentary caucus supported it. The TPP-11  was approved for ratification by the Coalition and Labor in the Senate in October 2018, with opposition from the Greens, Centre Alliance and other cross-benchers.

Six of the eleven countries  ratified the TPP-11  by November 2018, and it came into force for those countries on December 31, 2018. they are Australia, New Zealand, Canada, Mexico, Japan, Singapore  and Vietnam.

As of  June 2021, Malaysia, Chile, Peru and Brunei  had not ratified the deal. Malaysia had concerns about its development impacts, and was reviewing its involvement.  Chile had referred it to scrutiny by parliamentary committees, which was interrupted by civil society protests about inequality that demanded constitutional change. Peru's parliament was dissolved in 2019 after a constitutional crisis. Brunei is an absolute monarchy without a parliament.

In June 2021, the UK applied to join the CPTPP as part of its post-Brexit strategy.

For in-depth analysis and resources, including AFTINET’s submissions  to the Parliamentary Inquiries,  click here.

31 March, 2022: Details have emerged on the US proposal for an Indo-Pacific Economic Framework (IPEF), with the Australian Trade Minister Dan Tehan saying that a launch of negotiations could begin as early as April.

28 February: AFTINET has raised the alarm over the possibility that British corporations will gain the right to sue the Australian Government if the UK is granted membership in the Comprehensive and Progressive Agreement for Trans-Pacific Partnership (CPTPP).

February 14, 2022: The Joint Standing Committee on Foreign Affairs Defence and Trade (JSFADT) held an inquiry into  he expansion of the Comprehensive and Progressive Trans-Pacific partnership (CPTPP) in 2021, and  the committee report was released on February 10, 2022.

The government has a majority on this committee, which makes general investigations into trade issues. The UK, China and Taiwan applied in that order in 2020 to join the CPTPP, and their applications will be considered by the eight of the eleven governments that have ratified the agreement.

The report recommends that Australia support the applications of the UK and Taiwan, but places conditions on support for China’s accession.

May 10, 2021 ; The Comprehensive and Progressive Agreement for Trans-Pacific Partnership (CPTPP) was signed in 2018 by 11 countries: Australia, New Zealand, Japan, Chile, Peru, Mexico, Canada, Malaysia, Singapore, Brunei and Vietnam, after the US withdrew in 2017. The remaining 11 re-badged the agreement as the CPTPP and suspended some of its most controversial clauses. But these concerns have also influenced four of the 11 signatories to still not ratify the agreement. In this context, expansion of the agreement seems premature.

The UK sees this deal forming a pathway to further market access under the 11-nation Comprehensive and Progressive Agreement for Transpacific Partnership (CPTPP), which Japan will support as part of the agreement.

August 17, 2020: Dr Patricia Ranald’s Conversation article today argues for an end to secrecy and a more open and democratically accountable trade process. AFTINET will give evidence on August 24 to a Joint Standing Committee on Treaties hearing into the trade agreement process.

August 6, 2020: Darell Leiking, Malaysia’s former minister of international trade and industry and MP for Penampang has confirmed that on November 29, 2019, the government decided that it had made the right decision in not ratifying the Comprehensive and Progressive Agreement for Trans-Pacific Partnership (CPTPP). This was based on a one-year research effort, which had found potential negative impacts on domestic industry.