AFTINET has examined policy documents, public statements and past records to put together a scorecard and analysis comparing the trade policies of the major parties.

Here’s how their trade policies stack up in terms of corporate rights, human rights, the environment, labour rights, transparency and the TPP.

The Coalition’s track record on trade is clear.

Since being elected, the Abbott and Turnbull Governments have agreed to include investor rights to sue governments (ISDS) in trade agreements with China and Korea as well as in the massive Trans-Pacific Partnership deal. Because the US is part of the TPP, this opens up Australia for the first time to being sued by powerful US-based companies if they can argue that future laws or policies could harm their investment. US companies are the most frequent users of ISDS.

While former Trade Minister Andrew Robb did not agree to legislative change on medicines in the TPP, he did agree to implement “other measures” which will have the effect of extending monopolies on expensive biologics medicines – potentially costing our health system hundreds of millions for each year of delay in access to cheaper forms of these medicines.

The current Coalition Government’s trade and investment policy contains no statements on the inclusion of enforceable labour rights in trade deals. But its practice shows it is not a priority. The Japan FTA and China FTAs do not have any chapters on labour rights at all. The Korea FTA has a chapter containing weak labour standards, but none are enforceable. The TPP has a more extensive chapter, but the standards have many gaps and many of them are not effectively enforceable. For example, there is no legally binding commitment to end forced and child labour.

The Coalition has also agreed to remove local labour market testing to ensure that local workers are not available before employment of temporary migrant workers in the Korea and China FTAs and in the TPP. The China FTA also allows unlimited numbers of temporary Chinese workers to be imported for large projects. These projects can have conditions for these workers that could potentially undercut local wages and conditions. While Labor was able to negotiate some protections they may not be sufficient to ensure that workers are not exploited.

On transparency, not only does the Coalition justify the highly secretive negotiations process for trade agreements until after they are signed, but they also refused to commission an independent study of the TPP even after its text was released. This is despite it being the biggest trade deal in history, and despite calls from a wide range of stakeholders including AFTINET.

In summary, a vote for the Liberal National Coalition is a vote for more of the same trade policies: policies that set rules for global corporations at the expense of people and the environment.

You can read more on the TPP, ChAFTA and KAFTA by following the links.

Labor has a detailed trade policy platform (from page 23) and a shorter election trade policy which commits the party to global trade agreements but says the benefits of trade can and must be shared fairly, both at home and abroad.

The shorter election policy commits to greater transparency by releasing draft negotiating texts and tabling the final text in parliament before it is signed. In addition to opposing ISDS in future trade agreements, the policy promises to review all current ISDS clauses in Australian trade agreements.

While Labor’s policy has many positive features, it loses a star because of its record on voting on the implementing legislation of trade deals. In the case of the China FTA, while it did attempt to protect the rights of vulnerable temporary migrant workers through amendments to the regulations of the Migration Act, it still voted to pass the legislation for the whole agreement, which included ISDS. It remains to be seen how effective the Migration Act regulation amendments will be. Labor also voted for the implementing legislation of the Korea FTA which included ISDS.

The Greens' election trade policy is consistent with their historical approach to international trade with the core principles of fairness and democracy and a strong focus on the need to assist developing countries.

The Greens have a strong record of opposing trade deals which they do not consider to be in the public interest.

They have consistently opposed ISDS, including by introducing a bill to ban ISDS in trade agreements.

They oppose stronger monopoly rights for medicines and stronger copyright protections at the expense of consumers. They have supported greater trade transparency and a better treaty-making process. They have been strong opponents of the TPP.

The Greens opposed the implementing legislation for the China and Korea FTAs, which contained ISDS.

The Greens have publicly committed to voting against the TPP’s implementing legislation.

Senator for South Australia Nick Xenophon has been outspoken on trade deals, including the impact of the Japan, Korea and China FTAs on manufacturing jobs. He has consistently opposed the TPP because it contains ISDS extensions of monopolies on medicines, and restricts local content in government procurement. He has been particularly strong in calling for trade transparency. 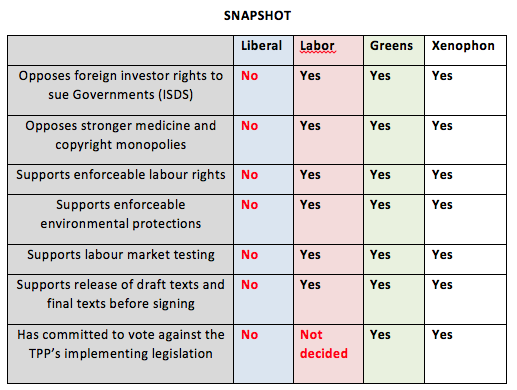